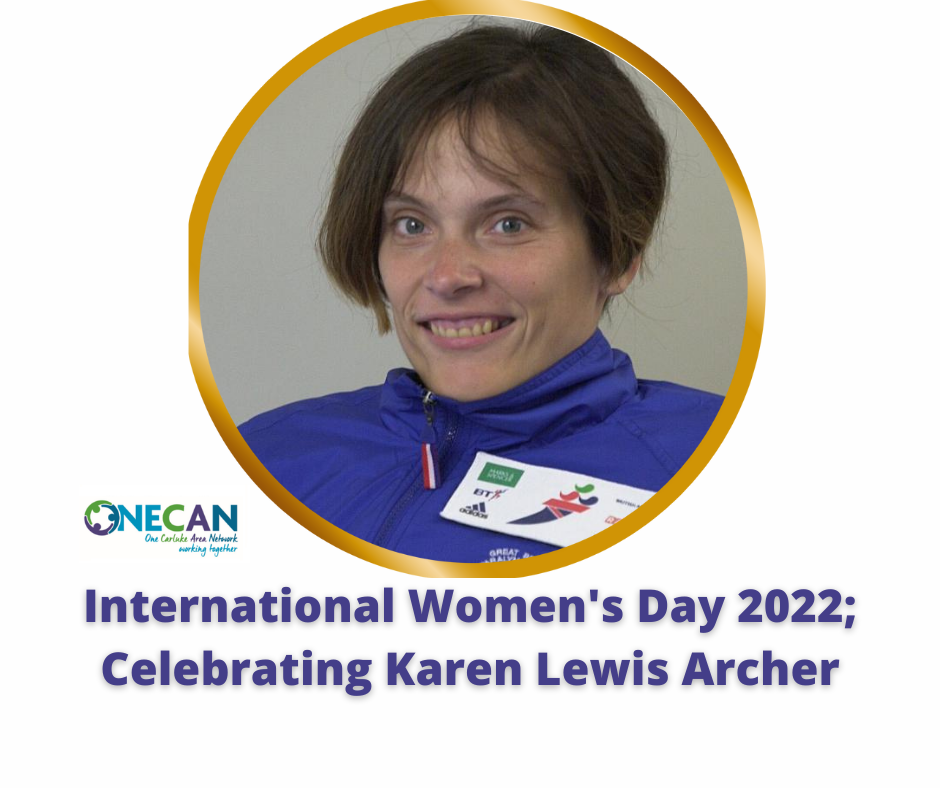 To celebrate International Women’s Day, we’ve been looking into the women of our local community in times gone by to highlight our heritage and celebrate successful women in the One Carluke Area Network (ONECAN).

Karen Lewis Archer was at the top of our list!

We found great information about her on Scottish Disability Sport which we thought we would share with you;

Paralympic Wheelchair Racer, Karen was a pioneer and role model who pushed the boundaries and led the way for other disabled people to compete and work in sport.

Karen was born in Carluke in South Lanarkshire and was encouraged to be active from an early age. She attended Carluke High School and very quickly it was identified that she had an aptitude for sport.  Karen, whose mother was a swimming coach at Clyde Valley Beavers, encouraged her to join the club. As a junior swimmer, Karen excelled as a member of the Scottish junior swim team and quickly became an accomplished swimmer headed for a promising international career before fate intervened and instead pushed her towards the athletics track.

In 1989 she was selected to swim at the World Youth Games in Miami where she won a gold medal in the 50m breaststroke. While there, the track relay team was looking for someone to fill in and turned to Karen. Not only did Karen rise to the challenge but she won a second gold medal in the relay.

On her return to Scotland she promptly joined Red Star Athletic Club in Glasgow where she met her coach Ian Mirfin and in her words “it all spiralled from there.”

She was selected for the Great Britain team to compete at the World Championships in Birmingham winning T52 gold in the 400m, silver in the 800m and bronze in the 1500m.

She was selected for both the Sydney and Athens Summer Paralympic Games but just prior to Sydney she developed serious arm and wrist problems. She was offered the option of an operation or racing with a strapped and painful wrist. Not wanting to miss out on the Paralympic dream, she chose the latter. Despite her injury she still managed fourth place finishes in both the 100m and 400m. In Athens she again missed out on the medals in the 200m and 400m.

In 2000, Karen graduated with a Bachelor of Arts degree in Leisure Management and in 2007 gained a Master of Science in Sports Management from Northumbria University.

As Scottish Disability Sports National Development Officer, she was a well known and respected colleague with a passion for inclusion. She worked hard to support the flourishing Branch infrastructure across Scotland and the established national events programme. Karen was most recently employed as Sport Development Officer with North Tyneside Council, a post she had held since 2004.

In 2003 Karen married Wayne, who she met through mutual friends and in 2005 their son Dylan was born followed by a daughter, Felicity in 2014.

Karen was also an inspirational speaker and through her brain child programme, ‘Gold Rush’, a programme of inspirational workshops and seminars which she delivered to schools, community groups and businesses drawing on her experiences as a world-class athlete. Karen had also written her first book for children featuring a young and equally plucky disabled heroine called Kellie Khan-do.

As well as being arguably Scotland’s greatest ever female wheelchair track athlete, Karen was also a role model and champion for disabled people. She had a determination and spirit to achieve in everything that she did along with a wicked sense of humour that was infectious.

Unfortunately, Karen passed away on the 14th December 2016.

Do you know a woman who deserves recognition from our local area? We’d love to hear about her as part of our Scotland’s Stories project!

21 April 2022
Clydesdale Community Concert Bands Annual Summer Concert is back on the 20th May at Carluke Lifestyles Centre.
Read More

8 April 2022
For the third year in a row with his wife, Wendy, Tom Kennedy is walking the Kiltwalk. On Sunday 24th…
Read More